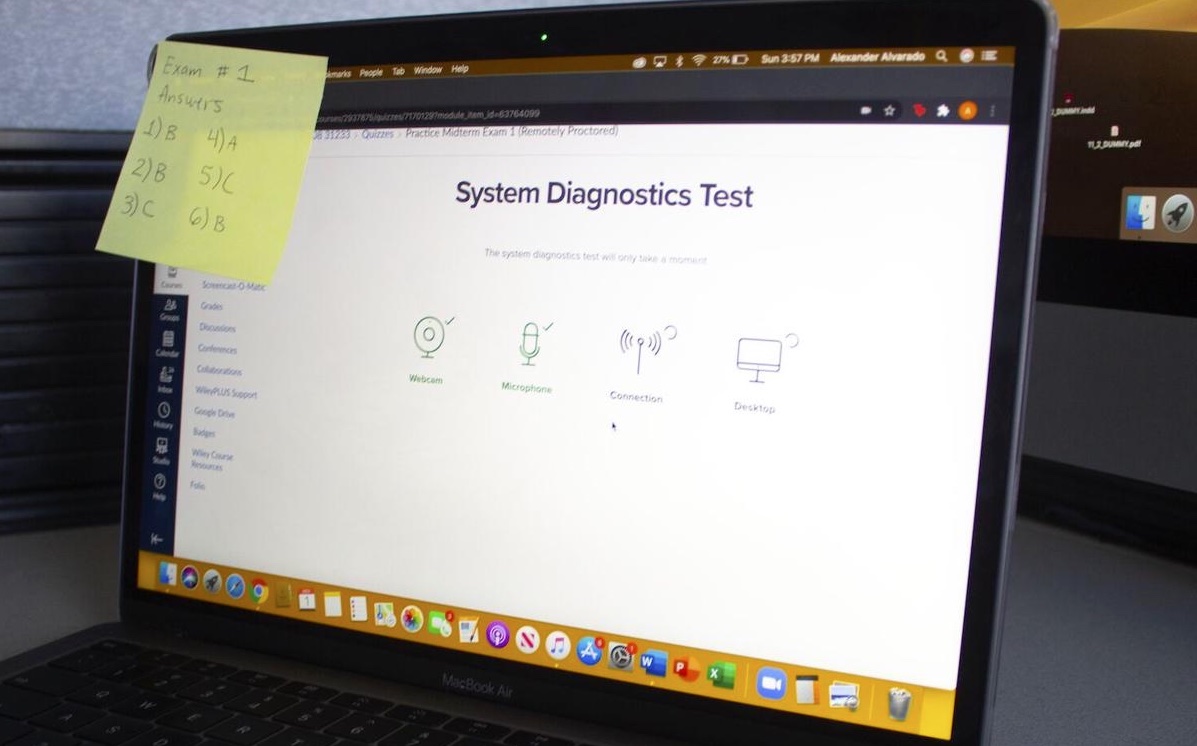 The switch to online exams

In February of 2020 the first person in The Netherlands tested positive for COVID-19, which quickly led to a national lockdown. After that universities had to close for physical lectures. This meant that universities quickly had to switch to both online lectures and tests.

For universities this posed a problem: how are you going to prevent students from cheating if they take the test in a location where you have no control nor visibility? In The Netherlands most universities quickly adopted anti-cheating software that students were required to install in order to be able to take a test. This to the dissatisfaction of students, who found this software to be too invasive of their privacy. Students were required to run monitoring software on their personal device that would monitor their behaviour via the webcam and screen recording.

Proctorio is such monitoring software and it is used by most Dutch universities. For students this comes as a Google Chrome extension. And indeed, the extension has quite an extensive list of permissions. This includes the recording of your screen and permission to read and change all data on the websites that you visit.

All this was reason enough for us to have a closer look to this much debated software. After all, vulnerabilities in this extension could have considerable privacy implications for students with this extension installed. In the end, we found a severe vulnerability that leads to a Universal Cross-Site Scripting vulnerability, which could be triggered by any website. This means that a malicious website visited by the user could steal or modify any data from every website, if the victim had the Proctorio extension installed. The vulnerability has since been fixed by Proctorio. As Chrome extensions are updated automatically, this requires no actions from Proctorio users.

The Proctorio extension inspects network traffic of the browser. When requests are observed for paths that match supported test taking websites, it injects some content scripts into the page. It tries to determine if the user is using a Proctorio-enabled test by retrieving details of the test using specific API endpoints used by the supported test websites.

Once a test is started, a toolbar is added with a number of buttons allowing a student to manage Proctorio. This includes a button to open a calculator, which supports some simple mathematical calculations.

(In our Zoom exploit, the calculator was opened just to demonstrate our ability to launch arbitrary applications, but in this case we actually exploit the calculator itself!)

By using one of a number of specific paths in the URL, adding certain DOM elements and sending specific responses to a small number of API requests Proctorio can be activated by any website without user approval. By pretending to be in demo mode and automatically activating the demo, the page can start a complete Proctorio session. This happens completely automatically, without user interaction. Then, the page can open the calculator and use the exploit to execute code in the content script.

The content script itself does not have the full permissions of the browser extension, but it does have permission to send messages to the background page. The JavaScript on the background page supports a large number of different messages, each identified by a number indicated by the first element of the array which is the message.

The first thing that can be done using that is to download a URL while bypassing the Same Origin Policy. There are a number of different message types that will download a URL and return the result. For example, message number 502:

(The # is used here to make sure anything which is appended after it is not sent to the server.)

This downloads the URL in the session of the current user and returns the result to the page. This could be used to, for example, retrieve all of the user’s email messages if they are signed in to their webmail if it uses cookies for authentication. Normally, this is not allowed unless the URL uses the same origin, or the response specifically allows it using Cross-Origin Resource Sharing (CORS).

A CORS bypass is already a serious vulnerability, but it can be extended further. A universal cross-site scripting attack can be performed in the following way.

Some messages trigger the adding of new content scripts to the tab. Sometimes, variables need to be passed to those scripts. Most of the time those variables are escaped correctly, but when using a message with number 25, the argument is not escaped. The minified code for this function is:

This function c0693() contains a function which is converted to a string. This inner function not executed by the background page, but by converting it to a string it takes the text of this function, which is then called using the argument a in the content script. Note that the last line in this function does not escape that value. This means that it is possible to include JavaScript, which is then executed in the context of the content script in the same tab that sent the message.

Evaluating JavaScript in the same tab again is not very useful on its own, but it is possible to make the tab switch origins in between sending the message and the execution of the new script. This is because the call to executeScript specifies the tab id, which doesn’t change when navigating to a different page.

Message with number 507 uses a synchronous XMLHttpRequest, which means that the JavaScript of the entire background page will be blocked while waiting for the HTTP response. By sending a request to a URL which is set up to always take 5 seconds to respond, then immediately sending a message with number 25 and then changing the location of the tab, the JavaScript from the 25 message is executed on a new page instead.

For example, the following will allow the https://computest.nl origin to execute an alert on the https://example.com origin:

The URL https://computest.nl/sleep is used here as an example of a URL that takes 5 seconds to respond.

The video below demonstrates the attack:

Finally, the user could notice the fact that Proctorio is enabled based on the color of the Proctorio icon in the browser bar, which turns green once it activates. However, sending a message [32, false] turns this icon grey again, even though Proctorio is still active. The malicious webpage could quickly turn the icon grey again after exploiting the content script, which means the user only has a few milliseconds to notice the attack.

What can we do with UXSS?

An important security mechanism of your browser is called the Same Origin Policy (SOP). Without SOP surfing the web would be very insecure, as websites would then be able to read data from other domains (origins). It is the most important security control the browser has to enforce.

With an Universal XSS vulnerability a malicious webpage can run JavaScript on other pages, regardless of the origin. This makes this a very powerful primitive for an attacker to have in a browser. The video below shows that we can use this primitive to obtain a screenshot from the webcam and to download a GMail inbox, using our exploit from above.

For stealing GMail data we just need to inject some JavaScript that copies the content of the inbox and sends it to a server under our control. For getting a webcam screenshot we rely on the fact that most people will have allowed certain legitimate domains to have webcam access. In particular, users of Proctorio who had to enable their webcam for a test will have given the legitimate test website permission to use the webcam. We use UXSS to open a tab of such a domain and inject some JavaScript that grabs a webcam screenshot. In the example we rely on the fact that the victim has previously granted the domain zoom.us webcam access. This can be any page, but due to the pandemic we think that zoom.us would be a pretty safe bet. (The stuffed animal is called Dikkie Dik, from a well known Dutch children’s picture book.)

We contacted Proctorio with our findings on June 18th, 2021. They replied back within hours thanking us for our findings. Within a week (on June 25th) they reported that the vulnerability was fixed and a new version was pushed to the Google Chrome Web Store. We verified that the vulnerability was fixed on August 3rd. Since Google Chrome automatically updates installed extensions, this requires no further action from the end-user. At the time of writing version 1.4.21183.1 is the latest version.

In the fixed version, an iframe is used to load a webpage for the calculator, meaning exploiting this vulnerability is no longer possible.

Installing software on your (personal) device, either for work or for study always adds new risks end-users should be aware of. In general it is always wise to deinstall software as soon as you no longer need it, in order to mitigate this risk. In this situation one could disable the Proctorio plugin, to avoid it being accessible when you are not taking a test.